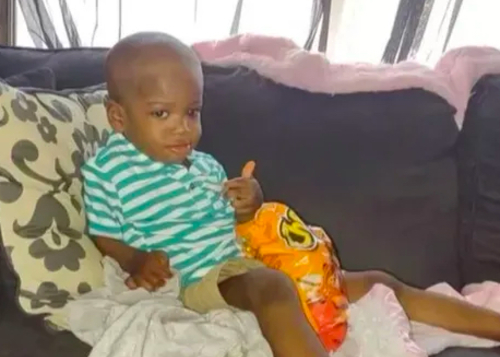 Police have arrested a Detroit mother in connection with the discovery of her 3-year-old son's decomposing corpse in a freezer in her west-side basement.

The body of the child, estimated to be about 3 years old, was discovered early Friday morning in the house on Monte Vista Street when a team of Detroit police officers from the 2nd Precinct and a representative of the state's Children's Protective Services program did a wellness check.

A woman who answered the door "tried to push the officers away as if there was nothing going on," Detroit Police Chief James White said during a press conference Friday down the street from the house where the body was recovered.

Neighbors told Fox 2 Detroit that the child, named Chase, was blind and had other disabilities, and that they had called Child Protective Services 13 times this year. They said the boy had not been seen since March.

Haynes said she became suspicious when her daughter, Chase's mother, told her the boy had burned his hand by touching a plateful of noodles.

"I knew that was some bull----," Haynes said. "I called CPS on her. A lot of us called, and they'd come out and give her kids right back to her."

Haynes said after the state visited her daughter's home several times, her daughter told her Chase had gone to live with his paternal grandfather's girlfriend in Coldwater.

"But then (the grandfather) got out of jail and he told me Chase wasn't living with his girlfriend," Haynes said.

She said family members went to the house on Monte Vista about two weeks ago to confront her daughter, followed by another call to state Child Protective Services.

The Michigan Department of Health and Human services declined to provide information on the case to Deadline Detroit, saying such records are confidential.

The horror brings to mind the case of Mitchelle Blair, who in 2015 was found to be hiding the bodies of two of her children in a freezer in her apartment. Sentenced to life without parole, she told the judge at that hearing that she felt no remorse for killing the children, who she referred to as "demons."