This July 12 article is updated. 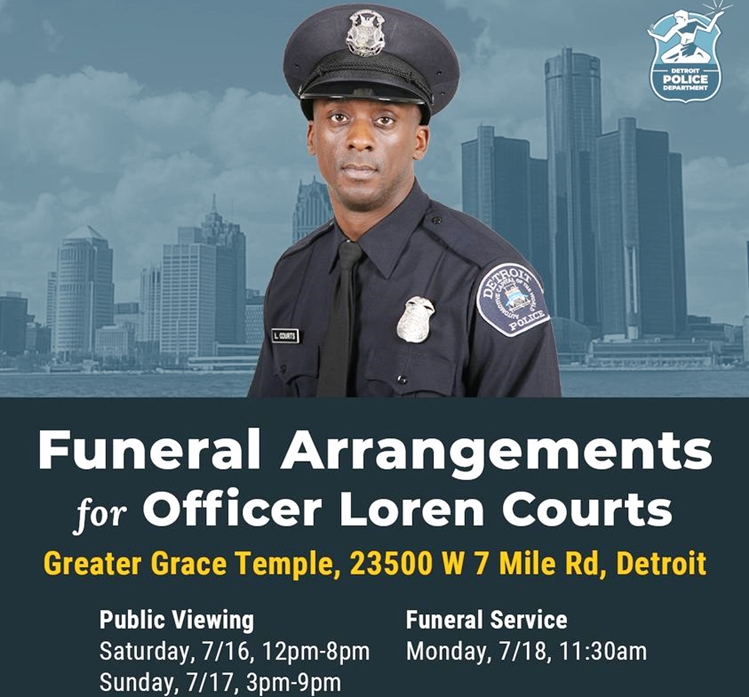 Flowers can be delivered to the church any time after noon Saturday, says Wilson-Aikens Funeral Home.

Courts' family and his department will have a funeral service at the church on Monday, July 18, at 11:30 a.m., led by Bishop Charles H. Ellis III. Among notable funerals at the 4,000-seat temple have been those for Rep. John Conyers, Aretha Franklin, Rosa Parks, Marcus Belgrave and Levi Stubbs of the Four Tops.

Burial will be at Woodlawn Cemetery on Woodward Avenue in Detroit.

American and state flags will fly at half-staff Monday at Michigan's public buildings and grounds in tribute to him. "The State of Michigan recognizes the duty, honor and service of fallen Officer Loren Courts," the governor says in a statement Friday. "Michigan residents, businesses, schools, local governments and other organizations also are encouraged to display the flag at half-staff."

Courts, who joined the force in 2017, was shot in the neck July 6 as he and partner Amanda Hudgens arrived at a west-side apartment building where gunfire had been reported. Another officer killed Ehmani Davis, 19, as he walked out while holding the semi-automatic pistol that was used.

Sheldon Thomas, 26, is charged with making a false statement in buying the gun for the teen.

"He was an amazing dad, my best friend and the man I married," his widow posted on Facebook a day after the tragedy. "I'm broken, I can't begin to imagine how we are going to live without him."

Memorial contributions to support the family can be made to the Detroit Public Safety Foundation, where "DPD - Officer Courts Memorial Fund" is the second item in a drop-down menu at the "Donate" button.