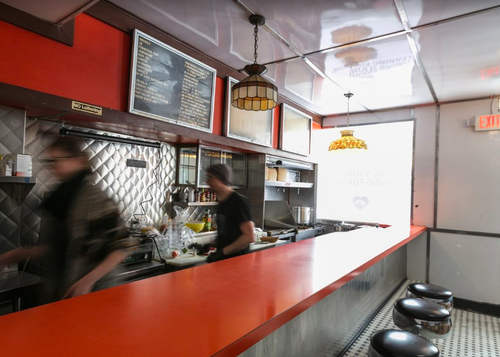 Some had hoped the former New Martha Washington bakery in Hamtramck would remain a paczki purveyor even after its April closure. Former owner Sandy Bakic, whose family opened the business in the '70s, said she'd even share her special recipe if someone would "carry on tradition" at the site.

But there's a lot of paczki in Hamtramck. What there's not a lot of is seating at Dos Locos, the beloved, late-night gringo-taco spot next door.

Axios Detroit reports the counter-top and carryout restaurant has been expanding into the old bakery since April with an opening targeted for September.

A photo on the site shows the old bakery transformed into a modern dining area of light hardwood and floor-to-ceiling murals in black and white by Detroit artist Michelle Tanguay. Previously, Dos Locos was slider restaurant Campau Tower.